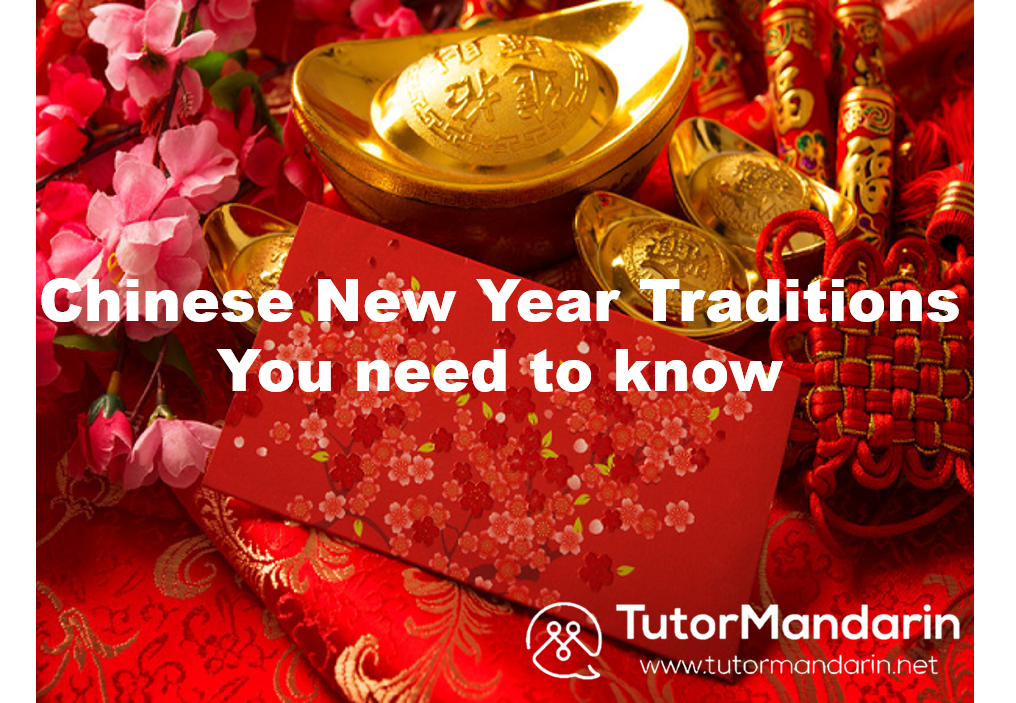 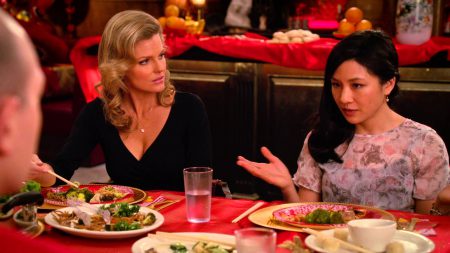 Have you ever been to networking event in Chinese countries and ended up being awkward, because you don’t speak or know anything about this foreign language or culture?

Do not fear, after reading this post, I can guarantee that you will get an overview of the most common Chinese New Year Traditions. I’ll also share some of the famous new year greetings.

China is one of the fastest-growing countries in the world and the Chinese language is one of the international languages that is widely-spoken. Nowadays, a lot of non-Chinese-native-speakers are looking for opportunities to work with Chinese companies. Who knows? May be you might end up owning a company in China!

To work with Chinese people effectively, first, you must learn their language and know about their culture. Today I’ll share some of them. “Chinese New Year Traditions”. This is something you need to know if you want to impress your  Chinese friends during the next networking event.

Let me start with the origin of Chinese Lunar New Year. It’s not clear when the Chinese New Year traditions started in China. Some people believe the tradition started during the Shang Dynasty (1766 BC – 1122 BC) while some believe it started earlier during Emperor Yao and Shun era (~2300 BC).

Legend has it that the beginning of Chinese New Year started due to the imaginary beast called the “年兽 Nián shòu” which means ‘year’ in Mandarin.

The “年 – Nián” (year) looks like an ox with a lion head and inhabits in the sea. At the night of New Year’s Eve, the “Nian” will come out to harm people, animals, and properties. 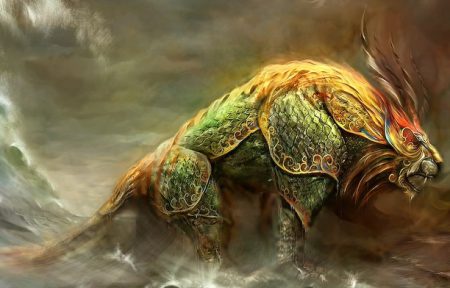 Later, people found that the “年 -Nián” fear the color red, fire, and loud sounds. Therefore, for self-protection, people formed the habit of wearing red, posting red “对联 – Duì lián” (see in the picture below) in front of their house as well as launching fireworks, and hanging lanterns at year end.

Nowadays people do these as a celebration instead of protection. A lot of Chinese people believe that the color red can bring good luck. So, now you know which color to choose for your Chinese friends.

When does Chinese New Year start? 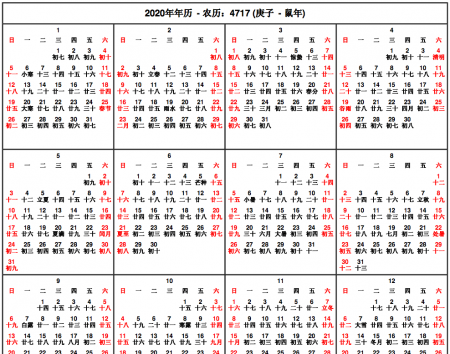 The Chinese New Year starts on the second new moon after the winter solstice and officially ends 15 days later on the full moon.

Although it’s 15 days in total, people usually get seven days off to celebrate the New Year. It is the longest public holiday in China. Students usually take a 1-month absence to celebrate.

So, what is the lunar calendar and how is it different from the solar one? A lunar calendar is based on the moon and the latter on the sun. A lunar month is around two days shorter than a solar month, and in order to catch up with the solar calendar an extra month is inserted every few years. This means the Chinese New Year falls on a different date each time.

How to prepare for Chinese New Year? 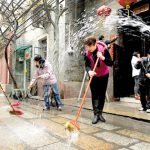 Preparation usually starts a couple weeks before the Chinese New Year Eve. This is the time to clean and decorate the house. It is one of the Chinese New Year traditions to clean the house from top to bottom to get rid of bad luck from the old year. By doing so people believe they welcome good luck with a clean house in the New Year.

Once the celebration starts, it is a taboo to sweep the house which means sweeping away good luck. I will share about more taboo at the end of the blog. Cleaning house can also mean settling all your unfinished business to start fresh for the next year. Most people wouldn’t sweep their house for the first 3 or 4 days. But there are some people who wouldn’t sweep their house throughout the New Year which is 15 days. 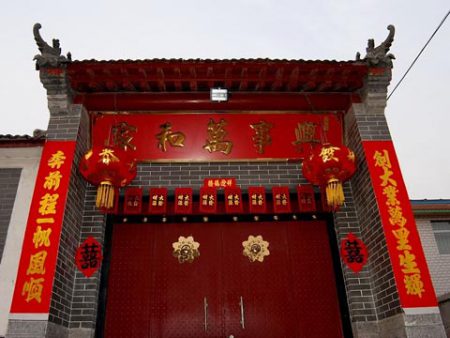 After cleaning, they would decorate the house with red decorations which includes red “对联 – Duì lián” ( see in the picture), red “福 – Fú” (abundance in English) character, red Chinese zodiac animals (of the year) paper cut. In the ancient time, people would make their own decorations.

Nowadays people would just buy them. During this season China town is overly crowded with people buying for festive goods.

1.Praying to the ancestors 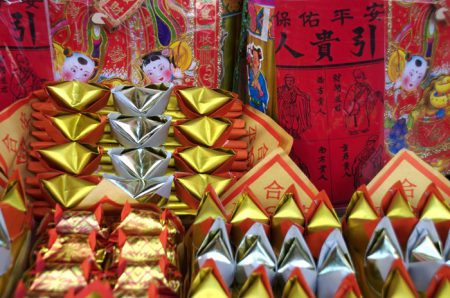 Chinese people are very respectful of their ancestors. The New Year Celebrations can only begin after paying respect to the ancestors. This is also part of the Chinese New Year traditions.

On New Year’s Eve, they will either go to the temples or pray the ancestors at home.

They usually offer food and burn incense paper to please their ancestors so that they might bring good luck.

Chinese people firmly believe that by burning incense money paper (which is also called hell money) their ancestors will receive wealth in the afterlife. So that they can look after them to create more wealth. They would ask for more wealth than this year so that they can offer more next year. 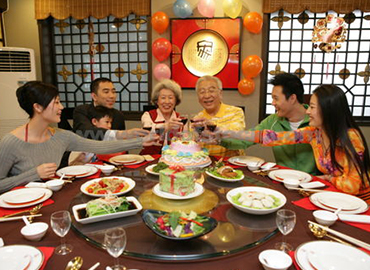 The reunion dinner is one of the most important Chinese New Year traditions of the celebration. It is also known as “团年 – Tuán nián” (reunite or grouping year).

If one of the family members couldn’t participate in the grand feasting, his family will place an empty seat at the banquet to symbolize his presence. So, you can see how much Chinese people take the reunion seriously.

People from all over China or the world will travel back to their hometown. The train is their most favorite way of transport since it is cheap and efficient. Therefore the train can be overly packed in this time of the season.

One tip for foreigners is to travel by plane if you want to go to China during Chinese New Year.

Do note that even the plane ticket sold out very fast so you will need to book in advance.

If you want I can write a separate post about the China travel survival guide in my next blog!!

For now, here are a few useful phrases to use “Tourists must know – useful Chinese sentences for traveling”. 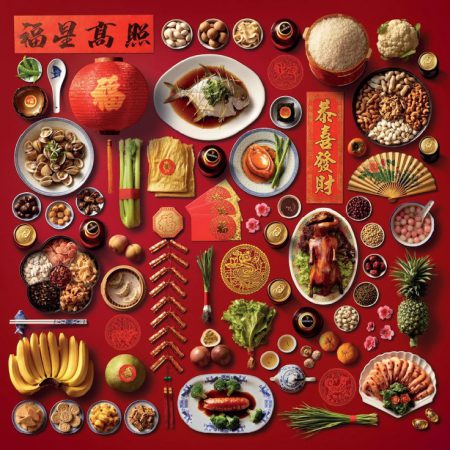 For this meal, the best food and dishes with good meanings are served in abundance, as they believe abundance food can bring great material wealth in the following Year. One of the most popular Chinese New Year Traditions is to have fish because there’s a pun in Chinese “年年有余 – Nián nián yǒu yú” (means may there be surpluses every year). “May there be fish every year” also sounds the same. The fish will be eaten whole and usually left some leftover to symbolize “having leftover of surpluses from the past year”. You can read more about “Chinese Puns” if you want to explore more.

Another popular dish will be “年 糕 -Nián gāo” (year cake) which sounds like a high year. It is believed to symbolize a higher income, a higher position, the growth of children, and generally “the promise of a better year”. It is considered good luck to eat it during the Chinese New Year period.

Dumplings are also another famous festive food as the saying ”招财进宝 – Zhāo cái jìn bǎo” (attracting wealth and treasure). Dumpling in Mandarin is “饺子 – Jiǎo zi” similar to “找- Zhǎo” (search) and they usually look like Chinese silver ingots (Currency used in China).There’s a strong belief that the more you eat the dumpling during the New Year the more you will bring money in the next year.

Another popular Chinese New Year traditions are to give “红包- Hóngbāo” (translated directly to red pocket) containing money. Usually, the married couple and the older family member give it to the children. Working adults also give their elders to share the blessing.

“恭喜发财，红包拿来 – Gōng xǐ fā cái, hóngbāo ná lái” is a common greeting during the New Year for children meaning “wishing you a prosperous in the upcoming year; so please bring a red packet money for me too”.

Check out more greetings at “Greetings in Chinese – Free Chinese Lesson on Greetings in Mandarin”. 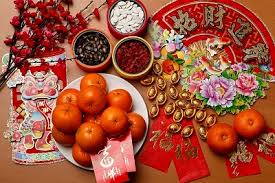 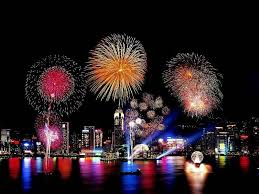 In the past, people used fire sticks and fire crackers to fright away “Nian” creature (as I have explained in the origins of the New Year). Today, people light firecrackers and fireworks as a major custom and to enhance the festive atmosphere.

So, even though lighting firecrackers produces a loud noise nuisance and piles of red paper shreds, Chinese people not only take it as their tradition, but also they generally enjoy the fireworks and firecrackers.

After mentioning most of the Chinese New Year traditions, I would like to share some famous taboos to avoid (as I have promised earlier).

It is really annoying for Chinese people if they heard negative words like “death, broken, ghost, ” (especially during this joyful festive season). Crying, washing and lending money can also consider bad luck. 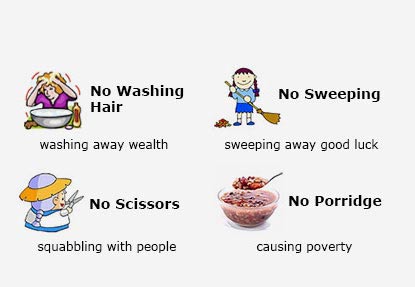 Mentioned above are just a few famous taboos. But don’t be terrified, there is also lucky culture to do “5 lucky things in Chinese Culture”.I hope that at least you will have some view on what you should and should not do during your next visit to China.You can also check out our How to Choose Chinese Gifts.

China is a very big country with its own unique traditions and festival. Chinese New Year traditions I a must to know one’s culture to gain their favor.

In this blog, you will learn about “Nian” and where did the Chinese love of fireworks and red color come from.

You won’t be puzzled when you come across houses decorated with red in China.

Last but not least you’ve got the most valuable insight on their taboos so that you can avoid and how’s the transportation like during New Year.

How many of the above facts have you already know? How many more facts do you know? Comment below and share your knowledge with other readers!!

And do try out our free trial classes “Learn Chinese Online 1-on-1 Online Chinese Tutors” if you planning to learn Chinese more effectively!