the most common Chinese symbols

China is a very big country with long and established traditions and customs. One of the well-known traditions is the Chinese people love to play with words and their meanings. Therefore, the calligraphies of Chinese symbols written on the red square paper is very common. In addition, most Chinese households use those red papers as decorations. You might probably already see some of them during a visit to your Chinese friends or Chinese temples. You will know some of them if you learn Chinese language. But, it can be quite annoying when you see the decorations but you have no idea what they mean. I’m going to tell you about some of the most common Chinese symbols decorations, how we use them, and the story behind each symbol. 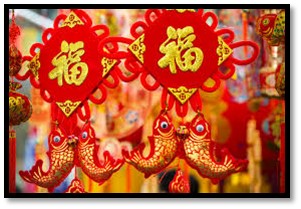 福 – fú is one of the most famous Chinese character widely used for decorations. This is the ultimate good luck character in the Chinese language. It means good fortune, good luck, and wealth ( all of what we wish for). The character itself contains two radicals with good meanings. The left radical “礻- shì” means ( the gift from) the God. The right side is the 富 – fù （a character) itself has the meanings of abundance and wealth. Therefore, 福 – fú is the ultimate good luck among Chinese symbols.This Chinese symbol is widely used for decorations and can be seen in almost every Chinese household during Chinese New Year and other big celebrations.

Sometimes you can see upside down 福 – fú symbols at the entrance of the house. This tradition is because the character 到 – dào and 倒 – dǎo have similar pronunciation.到 – dào means “to arrive” and 倒 – dǎo means “upside down” or “fall”. Thus, “the upside down 福” sounds similar to “福 arrives at the house”. You can read more about this usage of similar sounds in our previous post “Chinese New Year Traditions”, Chinese radicals in “How to write in Chinese – a Beginner’s Guide” and 5 Lucky Things in Chinese Cultures. 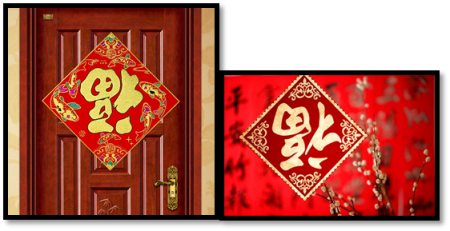 How this tradition started would be the accident of a clever servant. Legend has it that once upon a time, there was a clever servant. This servant accidentally pasted the 福 – fú decoration upside down. When the Prince saw it, he was furious. But the clever servant explained it in a way that it was done so because of 到 – dào and 倒 – dǎo similar sounds. The Prince was very happy with the answer and this tradition was handed down since then. 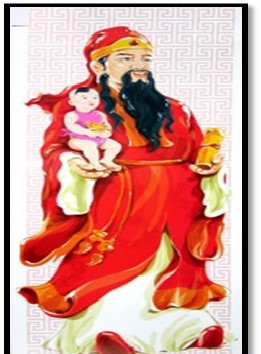 There’s even an older legend about the usage of this Chinese symbol. 福星 – fúxīng means the good fortune star god (one of the three famous “star gods –  三星 – sān xīng ”). This star is the Jupiter and Chinese people believe that 福星 provides good fortune and wealth.The legend tells us about a governor name Yang Cheng, a governor of Daozhou in Western Han (206 BC – 24 AD). He lived in a village where all the villagers are short due to some unknown reason. The Emperor found out about the villager during his visit to the village and he was very fond of being served by people shorter than him. He gave the order to send groups of villagers to serve him at the palace. The villagers were suffering because the Emperor did not let them return home and he forced them to serve him forever.

The village population was dropping significantly and those who left in the village were also suffering because their loved ones were taken away from them.

After his death, the village built a temple to commemorate him. As time passed by, he was believed to be immortalized as 福星 and has proven to bring happiness, prosperity and good luck to all those who need it the most.

This is how 福 – fú becomes the ultimate symbol of good luck and abundance.

In the past, the government officials got the highest social status after the Emperor. Therefore, their salary 禄 – lù means good fortune (wealth) during the feudal era. Today, people still use it as a symbol that brings wealth and monetary fortune. Since there are a lot of Gods that provide wealth 禄 – lùxīng God is not as popular as the 福星 – fúxīng and 寿星 shòuxīng. Nonetheless, people still widely use “福 – fú,禄 – lù, 寿 – shòu” triplet as good luck decoration. 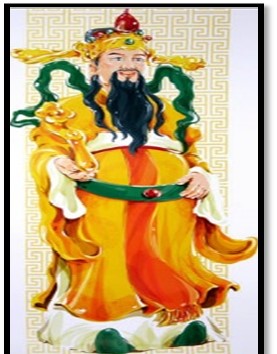 There’s also another legend of 禄星 – lùxīng (god of career achievement “lù star). The exact origin of 禄星 – lùxīng is unknown. One of the famous legends was that he was the Prince of Fen-yang Wang and also one of the most honored generals. He had eight sons and seven sons-in-laws. They were also high official. Thus, people believe that he can provide them to get the highest position and the highest salary.

This is the reason behind why people love to decorate using Chinese symbol 禄 – lù. 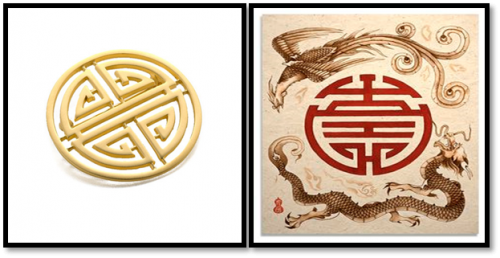 Shou is a Chinese symbol of long life. Long life also means good health which all of us wish for. Therefore, it is very common to give this symbol on birthdays and to elder people. Moreover, the calligraphy of 寿 – shòu is very nice. Therefore, you will see 寿 – shòu as a decorative symbol of all kind of objects ceramic, furniture and so on. Here’s a tip, next time when you get invited to Chinese birthday party, you can give them something with 寿 – shòu symbol 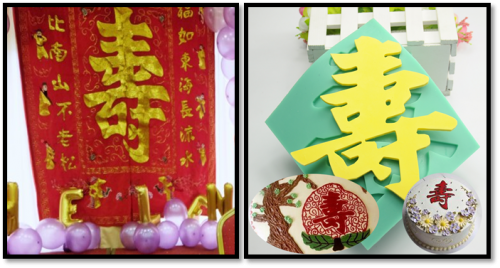 寿 – shòu as a decorative symbol for birthdays

The usage of this Chinese symbol come down from their belief in 寿星 shòuxīng (Canopus), the star God of the south pole. Chinese people believe that he has the power to control the life span of the mortal. Now you know why Chinese people consider 寿 (shòu) as the symbol of long life.

Anyway, the legend says every person’s life span is determined after we were born. Therefore, the number (digits) cannot be changed. But the 寿星 shòuxīng has the ability to twist the digits. One of the widely told tales will be about a boy who only has a life span of 19 years. He met a fortune teller who told him to serve wine and food to two old men playing chess in the forest. He also told him not to disturb them. The boy did what the fortune teller told him. These two men turned out to be the old man of the north pole and the old man of south pole ( 寿星 shòuxīng). They were very satisfied with the boy’s behavior and they reward him by changing his lifespan from 19 to 91 years. The young boy live happily for 91 years and died a peaceful death. Every single one of us wishes for a long, healthy life and this is how the Chinese symbol “寿 – shòu” become a very meaningful gift/ decoration for the Chinese people. 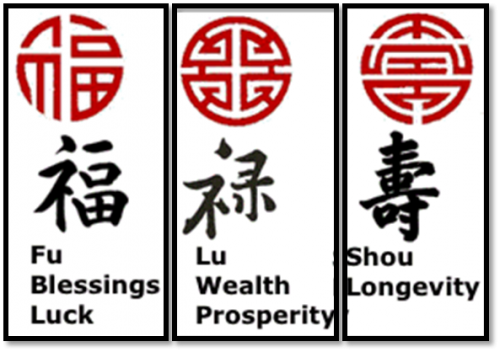 As you have learned from above, each one of these Chinese symbols has a very great and powerful meaning. Thus, together they become more powerful. People use these 3 powerful Chinese symbols as the ultimate and complete good luck decoration and gifts. When you give all these 3 Chinese symbols together, that means you don’t only wish for their fortune but also for their career and their health.

“喜喜”  双喜- shuāngxǐ makes the best gift for Chinese weddings. 喜喜 is also widely used in various objects just like 寿 – shòu. You can just paste the 喜喜 sticker to your gift or can even print it on gold jewelry as shown in the picture. 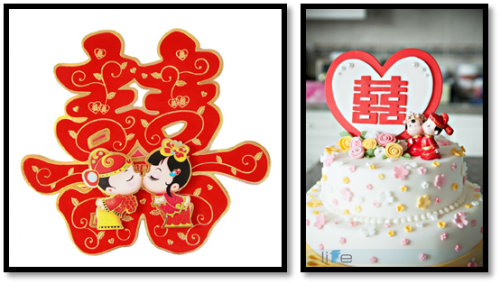 There is also another interesting sweet love story behind this tradition. Once there was a young student who on his way to the capital attend the national exam. The national exam is where people got their chance to become high ministers ( higher social status). Unfortunately, he fell ill halfway near a mountain village. Luckily, a herbalist and his daughter found him and took him home.They were very kind and took great care of him that the young student recovered shortly. When the time came for the student to left for the exam, he was very sad as he was already in love with the daughter.

The daughter gave a head part of a poem which goes:

“Green trees against the sky,

In the spring rain,

While the sky set off,

The spring trees in the obscuration“

It is a very common custom to exchange poems in Chinese language learning during that time.If someone gave a head part, the other person had to reply with a tail part of the poem. The student said he would reply once he got back from the capital.

At the capital, the student did really well in all the tests. When he reached the final state of the exam, the Emperor gave him the poem to complete:

In the breeze’s chase,

When the land colored up in red,

Straight away he remembered his lover’s poem and used it without hesitation. The Emperor was so joyful to see such a good matching poem that he gave the student the highest appraisal.

Once the exam is over, he returned back to the girl and married her. During the ceremony, they double the 喜 – xǐ character as they want to show double joy from the boy achievement in his exam and from the wedding. Since then, people use 喜喜 as decoration in joyous occasions.

Chinese people have the unique traditions and customs. It is hard to explain why they do certain things if you don’t know the meanings and the traditions. In this blog, I’ve explained the four most common and famous Chinese symbols that you can see in everyday Chinese people lives together with their usage and the stories behind them.

I hope this article will be useful when you come across these Chinese symbols next time.

Family and Coffee in Chinese

Talk About Picture in Chinese