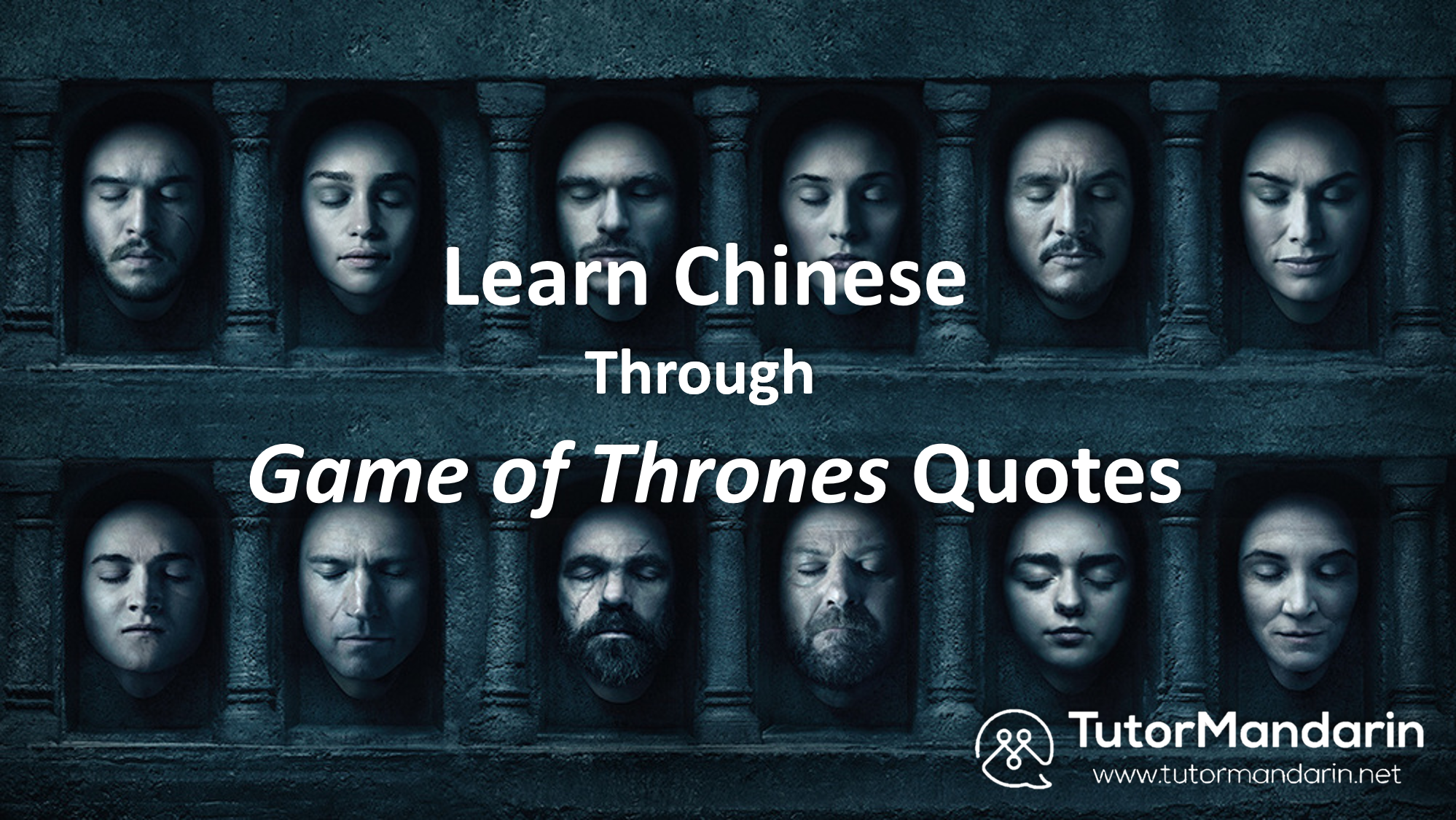 The top 10 Game of Thrones quotes in Chinese you should know.

As we all know “Games of Thrones” (冰与火之歌: 权力游戏, Bīng yǔ huǒ zhī gē: Quánlì yóuxì) season 7 finale is this Sunday. It is really exciting for all of us (fans)!

I love every part of the show especially the witty humor, the lyrical dialogues, the complicated moral questions and of course, the quotes! Today I’m going to tell you about my most favorite quotes from Game of Thrones and teach you how to say them in Chinese! If you are a Chinese learner, don’t miss this article! 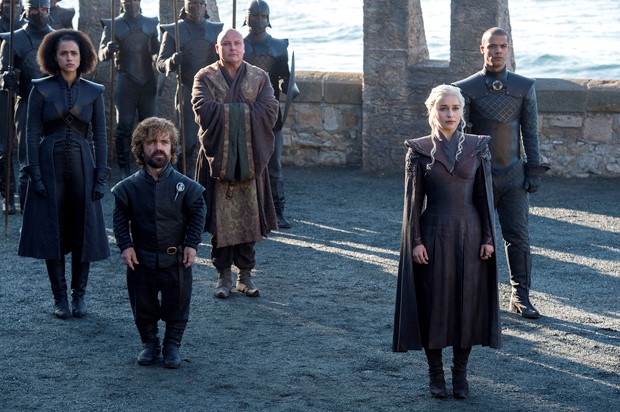 Are you also a Game of Thrones fan?

I’m usually not a big fan of English TV series. But this series by HBO is an exception. I love this series because it captures all the human nature and emotions: beauty and pain; honor and cruelty; reality and magic. This show is not just your typical ethical and political drama. With all the different characters and breath-taking story lines, it is the best world-building show that you can never get bored of. For me, this show is just a little escape from reality which is also realistically magical.

1. “When you play the games of thrones, you win or you die. There is no middle ground.” 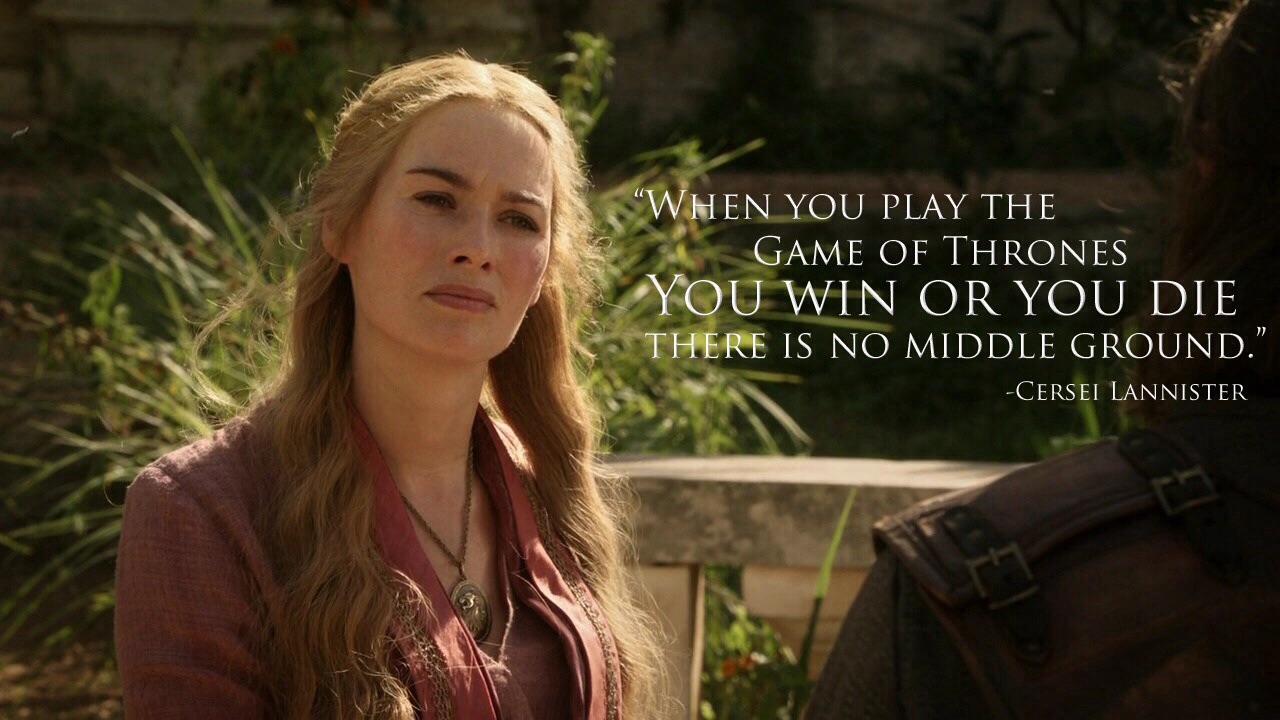 A quote from Cersei Lannister in “Game of Thrones.”

This is the quote that Cersei told Ned when he gave her a chance to surrender in season 1, episode 7 “You win or you die.”

I really like this quote as it shows the competitive nature of the world. Another reason is that this quote can apply to studies, competitions, business, or many other activities. This literally means, in reality, there is only winners and losers.

Thus, you shouldn’t be content with just being ordinary. I feel like the quote is pushing us to try our best to become winners in our own life and standard. A quote from Petyr Baelish in Game of Thrones.

This is another famous quote from Games of Thrones. Petyr Baelish, or “Littlefinger”, says this in Season 3, Episode 6 “The Climb”. The chaos Petyr involves in actually give him a chance to go further in this game, that’s why he says this. To Petyr, chaos is not a pit that traps him but a ladder that rises him up.

This is also one of my top favorite quotes. It reminds me of that song “what doesn’t kill you make you stronger”.

Difficulties and chaos are inevitable in our lives. However, we shouldn’t be too pessimistic or depressed about them. We should view them as the opportunities that will let us grow stronger. Just correspond with the Chinese proverb “塞翁失马，焉知非福”(Sàiwēngshīmǎ, yān zhī fēi fú.), meaning “Misfortune may be a blessing in disguise.”

3. “We march to victory or we march to defeat but we go forward, only forward.” 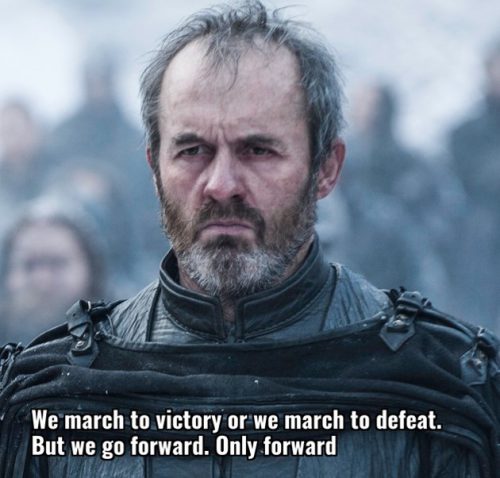 Stannis Baratheon says this to Davos Seaworth in the 6th episode, season 5, “The Gift.”

This quote teaches us never to give up even if the outcome is unknown. It also tells us that sometimes we just need to keep moving forward and risk it all in life.

4.    “The man who passes the sentences should swing the sword” 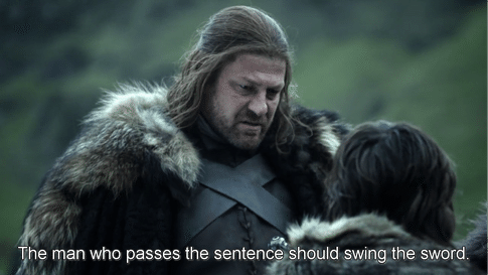 I believe most Games of Thrones fans know Ned Stark’s most famous quote. He teaches his young son in season 1, episode 1 “Winter is coming.”

In the show, what he means is that the one who gives the death sentence should be able to swing the sword himself to carry that sentence. And he should give the sentence only when he himself is not reluctant to swing the sword. Only then he would be fair and square to both his followers and the one he’s killing.

For me, this quote gives me a great leadership lesson. A good leader should never give instructions that he himself cannot do or carry out.

Jaqen H’ghar taught the first phrase to Ayar Stark in episode 10 of the season 2. In the show, the original language of this sentence is High Valyrian.

It is a common greeting Braavos. The other person will reply with “Valar Dohaeris”, meaning “All men must serve”. These two sentences mean everyone has to die one day so one must not be reluctant to serve.

Death is the universal truth and no one can avoid it. I like this quote because it reminds me that life is short and that we shouldn’t waste our times procrastinating or worrying about unnecessary things. Instead, we should try our best and live our lives to the fullest. 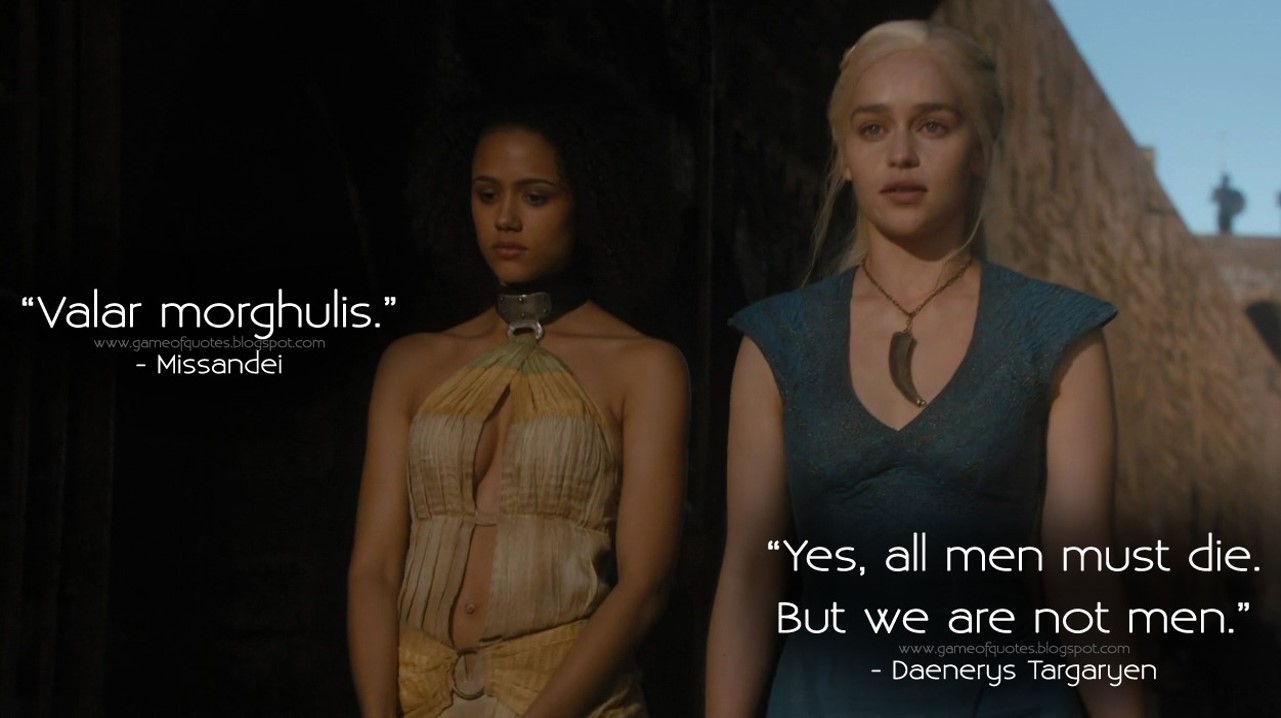 “All men must die, but we are not men.” in Game of Thrones.

Yes, it is similar to the above quote but it has a different meaning. Daenerys Targaryen said this in season 3, episode 3 “The walk of punishment.”

This quote is actually a motivational quote for the women in this male-dominated world. The quotes really give a powerful message to every woman “yes, all men must die but since we are women we don’t need to be afraid and nothing can stop us.” Of course, women also die. It’s just a figure of word encouraging women to stand up for themselves.

It’s a bit difficult to translate into Chinese since the words “man” and “human” in Chinese are totally different. In the English sentence, the first “men” means “human”(凡人); while the second “men” means “male” (男人). This is also another reason Games of Thrones have a lot of female fans. They showcase the difficulties that women face in the man world and give them hope and motivation to overcome that hardship. This is also one of my favorite Daenerys’ quote. She said this to Tyrion in season 5, episode 8 “Hardhome.” What she means is she’s going to break the whole system that oppressed common people.

For me, this quote means that if you want to succeed in life, you need to strike to get perfection. You can’t just satisfied with good enough. But perfectionism isn’t always good either. Therefore, a wise person must learn to draw the line between the perfection and just good enough. 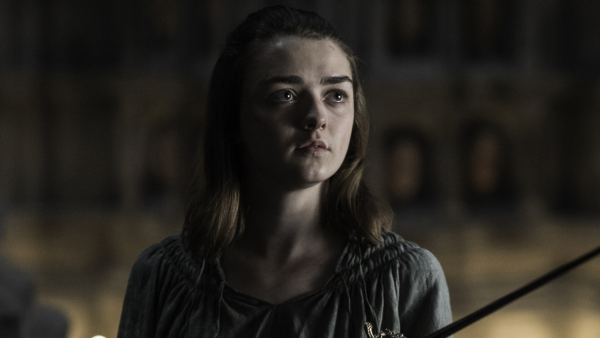 “Leave one wolf alive, and the sheep are never safe.”– Arya Stark

Arya Stark said this in the season 7 episode 1 “Dragonstone” when she took revenge on the house of Frey. She said this in a mocking way like you shouldn’t have let a Stark alive. You should have killed me if you could.

For me, it reminds me of the quote that my father used to tell me. “If you want to kill the tree, don’t leave its root behind, or else it would grow again”. This literally means if you want to destroy your enemy, don’t leave their offspring behind, or they will come looking for revenge before you know it. It sounds cruel, but I think it’s also applicable somewhat in today’s cruel society.

9.  “The powerful have always preyed on the powerless, that’s how they become powerful in the first place.” 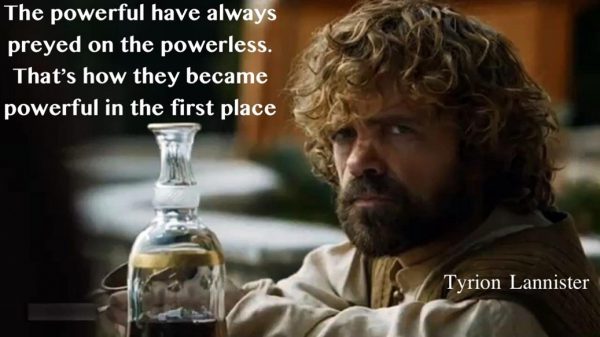 A quote from Tyrion Lannister in Game of Thrones.

Tyrion said this in the season 5 episode 1 “the wars to come”. What Tyrion means is that there is no way to build a land where powerful do not prey the powerless. Simply put, in Chinese chengyu, we say it “弱肉强食”  (Ruòròuqiángshí) meaning “the weak would easily be the prey to the strong.”

I like this quote simply because it left me to wonder if it’s true. I still can’t be certain whether all the rich and powerful people are the same greedy people.

10.  “A wise man once said a true history of the world is a history of great conversations in elegant rooms.” 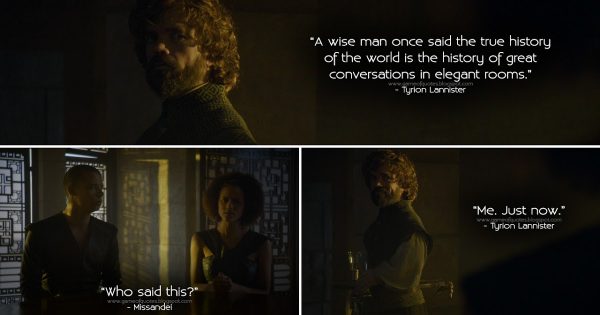 Another quote of Tyrion. He said this to Missandei and Grey Worm in the season 6, episode 3 “Oath breaker” referring himself as a “wise man.”

I love this quote because it makes me realize that history (great things) is built (achieved) by the decisions made by a group of great leaders behind closed doors.

In summary of Game of Thrones

In conclusion, Game of Thrones is a great TV series on HBO and there are a lot of remarkable quotes in the show. Among them, I just shared 10 of my favorite quotes as a Chinese learning journey for today. I hope if you are both a Chinese learner and a fan of Game of Thrones, this article would evoke resonance from you.

Let me know in the comment if you want to learn more! Also, feel free to leave a comment and let me know what you think about these 10 quotes. Have fun learning Mandarin while watching Game of Thrones finale. We’ll see you soon on TutorMandarin’s Chinese language blog!

How to Order Food in Chinese