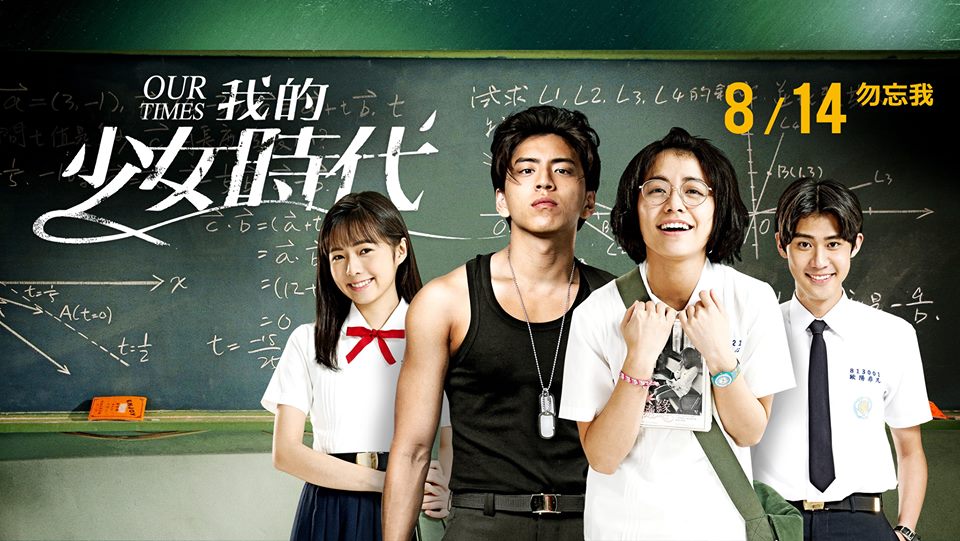 “Our Times”, Mandarin name “我的少女时代” (Wǒ de shàonǚ shídài), is a Taiwanese comedy romance film directed by Frankie Chen (陈玉珊, Chényùshān). 我的少女时代 literally means “The Time of My Maiden Years”. The film released worldwide in 2015. The plot is the memory of the leading actress’ high school life. Therefore the time is set in 1990s’ Taiwan. You will immerse in the nostalgic atmosphere in this film, as well as enjoy the plot with laughter, surprise, and tears. Of course, watching movies, Mandarin TV shows or listening to Chinese songs are always good ways for you to learn Chinese.

Noted: The plot section includes the main frame of the film, but not the ending. You can watch this Mandarin movie trailer first and see if you want to read “the plot of the film” section after you watch the whole movie.

Main characters from “Our Times” 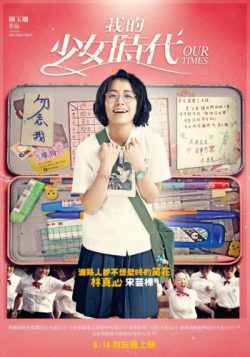 Performed by Vivian Sung (宋芸桦, Sòngyúnhuà), an ordinary but naive girl. Chen-hsin is pure, gentle, and imaginative about her crush and idol. At first, she is just plain and not eye-catching at all. However, she becomes more and more attractive not only because of her appearance but her sincere personality. The grown-up Chen-hsin performed by Joe Chen (陈乔恩, Chénqiáo’ēn). 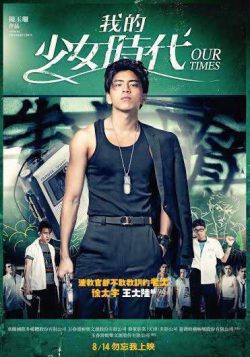 Performed by Darren Wang (王大陆, Wáng dàlù), the leader of a school gang. Always talks and acts aggressive and is a pain in school teacher’s ass. He has a crush on the most beautiful girl Tao Min-min at the first place and tries hard to fulfill the request Min-min gave him. But then he realizes she’s not that wonderful as he thought. The grown-up Tai-yu performed by Jerry Yan (言承旭 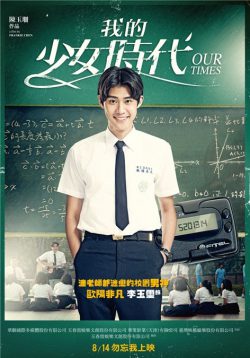 The talented and Prince charming in girls’ heart – Ouyang Fei-fan.

Performed by Dino Lee (李玉玺, Lǐ yùxǐ), a famous person on campus as he’s handsome, gentle, and also talented. Girls scream for him, including Chen-hsin. Later on, Ouyang also feels something for Chen-hsin. 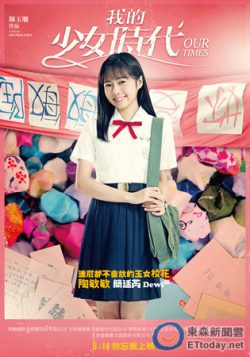 Performed by Dewi Chien (简廷芮, Jiǎn tíng ruì), is considered the prettiest girl on campus. Always acts tamed and elegant and has a lot of pursuers from school, including the school gang Hsu Tai-yu. Min-min doesn’t like Tai-yu at all at the beginning but afterward change her mind.

The plot of the film

Same with the year of its release, the beginning of the film also set in 2015, when the leading actress Lin Chen-hsin (林真心) is an ordinary office worker. The name of “Chen-hsin” in Mandarin literally means “sincere heart”, which corresponds to her pure and kind personalities. Although Chen-hsin is always considerate and being nice to her co-workers, she still receives criticize in the workplace. As the upsetting reality poured over her, Chen-hsin memorized her unforgettable high-school friendship and romance. Someone she can never forget. 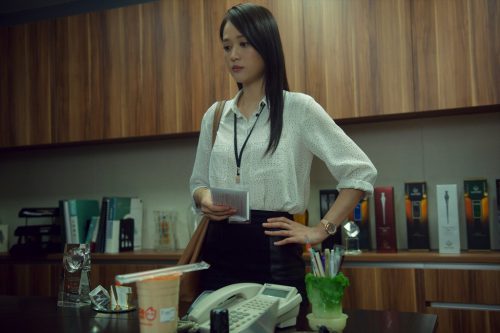 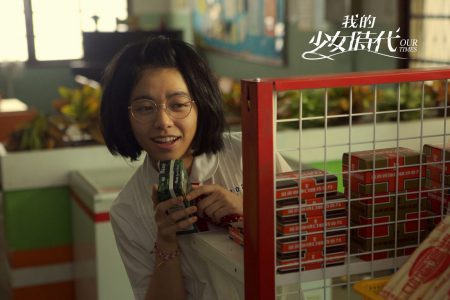 The main plot comes to Chen-hsin’s high school life with Hsu Tai-yu (徐太宇), a notorious gang leader in school, and Ouyang Fei-fan (欧阳非凡), a talented, handsome, and famous basketball player in the school team. As an ordinary high school student, Chen-hsin sees Andy Lau (刘德华, Liúdéhuá) as an idol and also has a huge crush on Ouyang, but she’s so not confident to be attractive to him. To her disappointment, she heard the rumors about Ouyang has a secret relationship with the prettiest girl in school, Tao Min-min (陶敏敏). 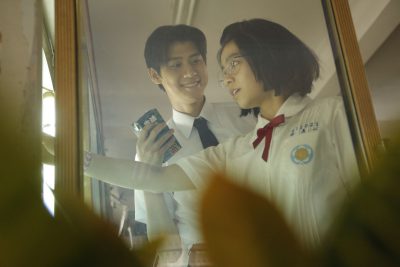 Chen-hsin has a crush on Ouyang 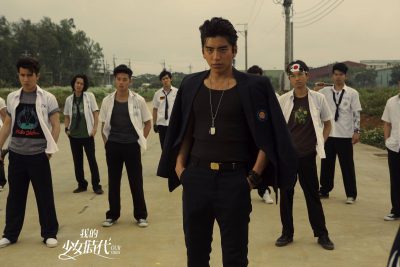 Tai-yu as the leader in school gang

What Chen-hsin doesn’t expect is Hsu Tai-yu’s involvement in her ordinary life. Hsu Tai-yu has a crush on Tao Min-min, and thus he sees Ouyang as an enemy. As Hsu Tai-yu knows Chen-hsin is admiring Ouyang, Hsu Tai-yu forces Chen-hsin to cooperate with him to tear up the relationship between Ouyang and Tao Min-min. 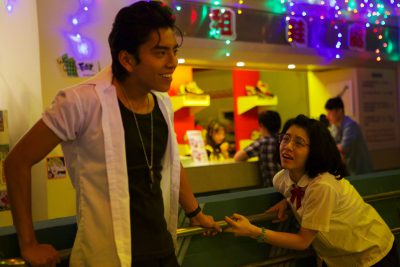 Hsu Tai-yu seems aggressive, and always make fun of the kind and tamed Chen-hsin at the beginning. However, you will find out  Hsu Tai-yu is actually a gentle and romantic person. Tai-yu helps Chen-hsin to dress up and makeup so that she becomes prettier; they also hang out as friends and Chen-hsin always ask Tai-yu not to fight with other gangs. The friendship between Hsu Tai-yu and Lin Chen-hsin becomes firm and even more than friendship. However, when the two of them are so reliable on each other, Tao Min-min and Ouyang Fei-fan’s involvements and  Hsu Tai-yu’s reason-unknown disappearance leave them some regrets in their high-school life.

Whether Chen-hsin and Tai-yu can reunite after they grow up or how will they connect to each other again, I’ll just leave you to find out. 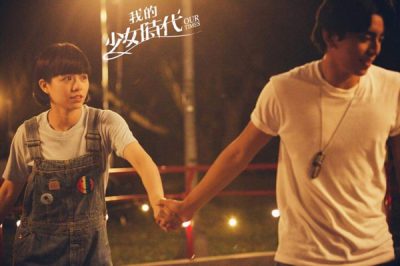 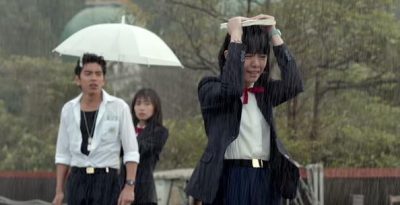 The theme song “A Little Happiness” from “Our Times” also becomes a hit around the world. For the record, “A Little Happiness” is the first song that earns more than a hundred million clicks on Youtube music video among Taiwanese as well as other Mandarin language songs. The theme song is so touching and matching with the movie plot that will get you goose bumps and emotional.

The singer of “A Little Happiness” is Hebe Tien (田馥甄, Tiánfùzhēn), a Taiwanese singer and actress. Also a member of girls group S.H.E., which is one of the most popular girl-group in Taiwan. The lyrics of the song are composed by 徐世珍 (Xúshìzhēn), 吴辉福 (wúhuīfú) and music by JerryC.

Watch full lyrics of “A Little Happiness” with Chinese, Pinyin, and English here.

It’s definitely not an ordinary romantic comedy. I am sure you are going to be impressed and touched after watching this film. The main plot in the film is set in the nostalgic 1990s when Aaron Kwok Fu Shing (郭富城), Andy Lao and Jin Tsheng Wu (金城武) are super idols in everyone’s hearts. Hence if you are also a fan of these famous actors and singers, don’t miss this film! The theme song “A Little Happiness” also becomes a hit around the world.

Learn and improve your Chinese listening through watching Mandarin movie “Our Times” as well as listening to the song “A Little Happiness”! For more interesting and fresh Mandarin topics, don’t forget to stay tuned with us on TutorMandarin website, Facebook, and Instagram!